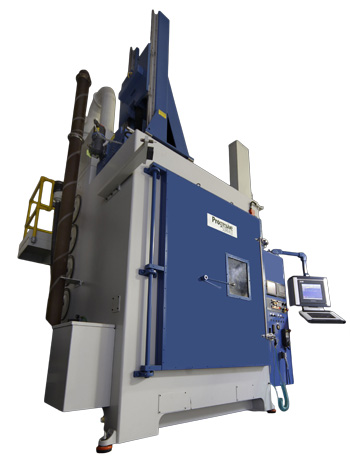 With a growing market requirement for Shot Peening. Syntech looked for market leader to support their customer requirements within the New Zealand and Australian market.

For Progressive having local representation strengthens the sales and service support of their product.

What is Shot Peening?

Shot peening is a metal working process which enhances the surfaces of a variety of different materials.

Various manufacturing processes used throughout the aerospace, aircraft, automotive, energy, and heavy equipment industries can produce tensile stresses on the surface of components. These processes include milling, turning, drilling, welding, severe grinding, heat treating, bending, and forming. The tensile stress left behind on the surface provides a perfect environment for a cracking or stress corrosion to start forming, reducing the life of these components.

Shot peening has been used successfully for many years. Although skill trades realized the benefits of this coldworking process long ago, modern shot peening has only had widespread use since the 1930's. In 1945 a patent was issued to John Almen for a method to measure the intensity of shot peening. Mr. Almen is considered by many to be the father of modern shot peening. His patent uses a thin metal strip, now called an Almen Strip, and an arc measurement device, now called an Almen Gage, to assign a value to the intensity of the shot hitting the part. An Almen Strip is held down on a flat block with 4 screws. When the strip is shot peened, a compressive stress is placed into the surface of the strip. When the strip is removed from the block, the strip arcs because the thin cross-section cannot resist the stress placed into the surface of the strip. This arc is measured with an Almen Gage.

A saturation curve plots Almen strip arc heights vs. exposure time on a graph. The saturation curve is generated by exposing the Almen strip to the shot stream for varying amounts of time. When the arc height is plotted against time, the intensity of the shot stream can be determined by evaluating the first point (or 'intensity') on the best fit line where, when the exposure time is doubled, there is a 10% increase in arc height. This system of quantifying the intensity of the shot stream helps assure that manufacturers from around the world can replicate a given shot peening process.

Many different parts are shot peened to improve life. Some examples include: