The MagnaValve is maintenance-free, rugged, economical and efficient

The benefits of our magnetic valve
The MagnaValve is a hardworking media flow valve with no moving parts, nothing to break, nothing to bring your blast cleaning job to a halt. Apply power and the MagnaValve's magnetic field is neutralized and shot flows through the valve. With no power, the permanent magnet stops all flow. This is an important feature of the MagnaValve. If the power to the valve is interrupted for any reason, the permanent magnet securely holds the shot, without the need for a secondary mechanical shut-off valve. MagnaValve owners never need worry that shot will flood a machine in event of a power failure. 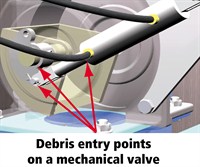 Why a MagnaValve is better than a mechanical valve

A mechanical valve is prone to seizing since debris can enter the valve through its moving parts. Valve seizures put a blast machine out of service. Also, mechanical shut-off valves can leak and flood the wheel assembly with shot. Because of its unique design, the MagnaValve isn’t damaged by flowing media and it’s completely sealed against debris. The MagnaValve's permanent magnet eliminates leaks.Maintenance crews and production managers appreciate its dependability and ease-of-use.

Cost savings
Because the MagnaValve gives you a level of control not possible with a mechanical valve, you will enjoy a cost savings from reduced media usage and lower media disposable fees. The MagnaValve also cuts energy costs since it optimizes the load on large horsepower motors and thereby reduces energy consumption. 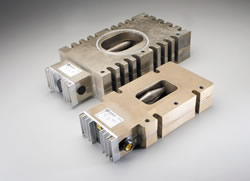